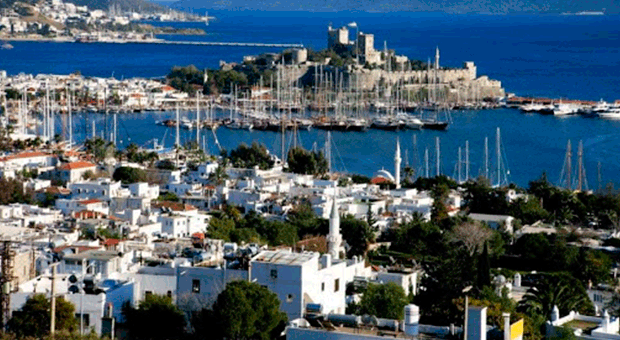 Beautiful coves, activities, Good Food and historical heritage that make it unique. Bodrum Turkey has everything any tourist wants to enjoy their holiday.

For nine months Bodrum is a quiet fishermen’s corner. Every summer, however, thousands of tourists arrive at its coast attracted by its gastronomy, its beaches, its nightlife and also its history. This coastal city southwest of Turkey was the birthplace of historians Herodotus and Artemis I, has a Persian past and was in the hands of Alexander Mango until becoming part of the Ottoman Empire. This mixture of cultures and eras is present in its eclectic landscape, where mosques and traditional White Houses mingle with modern yachts and discos.

What to do in Bodrum?

Bodrum, especially in the summer months, becomes an attractive tourist center with its coastal towns such as Gümüşlük, Yalıkavak, Turgutreis, Torba, Göltürkbükü, Gündoğan, Gümbet, Bitez, Yalıçiftlik, and Ortakent, impresses visitors with its White Houses, blue windows and fascinating nature. You can start your visit to the center of Bodrum by the famous Bodrum Castle, which has become a symbol of the region.

It is located in the Seaport (St. Peter’s Castle of Halicanarso), a relatively large place-it is a city that does not have the proper extension of Istanbul, Ankara or Izmir, which makes it easier to know – where you can walk. The entrance of the castle does not do justice to what inside awaits the visitor.

Although it is a secular country or at least so far-with a Muslim majority, it is customary to visit mosques such as Hagia Sophia or the Blue Mosque of Istanbul, as well as rocks-ruins more in the style of Classical Greece, for example, the ruins of Ephesus that are a wonder or those of Bergama that are in my opinion-fascinating.

The castle is neither one thing nor the other; it seems to go back to those times of disputes because it is a strategic enclave. Inside the castle is also the Museum of Underwater Archaeology. I’m not much of a museum, I like to get to know the street of the cities I visit or the bazaars… but I have to admit it’s impressive to see this museum inside the castle. It is surprisingly something very curious how they have managed to overlap both functions in one place.

Around 1300 BC a ship loaded with ten tons of copper ingots sank off the coast of southern Bodrum Turkey.

Through the activity Uluburun; a shipwreck in your pool we could see recreated in its original dimensions and with total accuracy the oldest underwater archaeological site on the planet.

The attendees first knew the method and techniques of Underwater Archaeology, actively participating in the extraction of significant pieces of the Bronze Age from the bottom of the pool where the replica of the shipwreck will be located.

The National Museum of Underwater Archaeology offered, for the first time, last June 2018 this activity, pioneering in our country and created by Archaeology and Didactics Start-Up University of Zaragoza and thanks to the invaluable support of the vice-rector of Students, University Extension and Sports of the Polytechnic University of Cartagena.